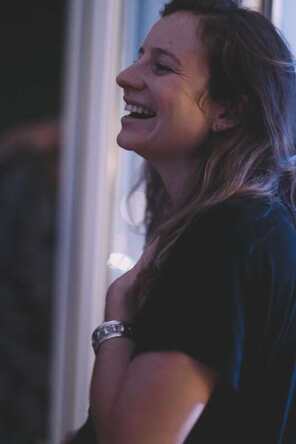 Melissa Lara Clissold is a singer, guitarist, music producer, and voiceover artist based in Istanbul, Turkey. She currently works as a Senior Communications Associate at ATÖLYE, where she also leads the Justice, Equity, Diversity and Inclusivity (JEDI) and Climate initiatives. In her spare time Melissa likes to write, play point and click adventure games, develop her own indie games, and work on collaborative multidisciplinary projects. Interested in humanitarian work, and activism—through art, literature, and music—Melissa hopes to bridge gaps between cultures through creativity, and collaboration.

​PROFESSIONAL LIFE
Melissa was born in Ankara, Turkey to an English/Irish father, and a Turkish mother. Throughout her childhood, due to the nature of her parents work, she lived in several countries such as Nigeria, the UK, Poland, and Turkey. The itch of travel therefore started young, and continued throughout her adult life. After studying English Literature and Philosophy at The University of York, she carried on to finish her MA in Social Anthropology of Development at the School of Oriental and African Studies in London. Her experience at The British Red Cross working with refugees, and international volunteers at Inter-Cultural Youth Exchange-UK, sparked her passion for humanitarian activism. After the UK, Melissa moved to Spain to work as an English Teaching Assistant for The British Council in a small Catalan sea-side town for 2 years where she also started singing in her first reggae band 'Soul Dimension'.  She then moved back to Turkey to begin another chapter of her life.

She currently works as Senior Communications Associate at ATÖLYE, a trans-disciplinary innovation platform (part of the Kyu Collective). Previously, she has worked as National Director (and later consultant) for the world's largest youth achievement programme, 'The Duke of Edinburgh's International Award' in Turkey, and as a
translator-editor for the independent news platform Medyascope. Her experience of volunteering and working for different
civil society organisations and NGOs, has driven her passion to combine music with social issues.

MUSICAL & CREATIVE LIFE
Melissa started playing piano at 9 years old, electric guitar at 16, and acoustic guitar at 17. She also played the clarinet for two years from 14-16 at school and had a mini go at playing the drums. Influenced by her parents good music taste at a very young age, music has always been her true passion. The now 34 year old singer song-writer has spent years experimenting with several different genres of music (with several instruments), and has recently become interested in producing music for video games (especially indie ones!)

She is the singer and guitarist for the reggae band 'Zeytin', which over the years, has gotten attention for being able to speak up on issues ranging from climate action, societal injustices, LGBTQ+ rights, and more. She is also a part of the female MC-DJ collective 'Sista Sound' which has been performing on International Women's Day every year, since 2014. Her latest personal project is 'Sista Theta', is one where she chooses to explore and experiment with sound, pixel art, and indie game dev. Finally, she was also a part of electronic music project 'Valley's Echo', and is now focusing on her new project 'Tehanu'.

As the co-founder of 'Jam Sessions Turkey', an initiative that aims for positive social change through music, Melissa believes that music has the power to bring people together—no matter their background, race, orientation, language, and gender . Through never cancelling a single event during the terrorist attacks in Istanbul, Jam Sessions Turkey was able to provide a safe space for everyone who wanted, to come together to share their emotions and thoughts during such a difficult time. After taking the online course 'Music and Wellness' taught by the Berklee College of Music, she has also loved to explore the power of music and sound in healing. In this respect, she also helped organise a 'Sleep Concert' in Istanbul.

Melissa also does a lot of other freelance work such as voiceover work (for cartoons) and creating jingles for ads. Passionate about promoting local sounds, she supports 'Beton Orman' (Concrete Jungle), a local initiative promoting the underground music scene in Turkey, as well as carrying out the booking for some DJs & artists especially from Istanbul. Moreover she has also volunteered. for Psybient.Org, a website dedicating to spreading information about electronic-ambient-psychedelic music worldwide. A lover of music festivals, she embraces sustainable & conscious ways of living, loves vegetarian & vegan food, good books, the internet, cats, plants, and all things related to nature.
Want to collaborate? Get in touch.
Powered by